Future Search derives from well-researched theories on the conditions under which diverse groups will cooperate (Weisbord, et al 1992). Our main sources of inspiration are two. One is Ronald Lippitt’s and Eva Schindler-Rainman’s large-scale community futures conferences in 88 cities, states, counties in North America. During the 1970’s they assembled as many as 300 people at a time, a vertical slice of an entire community. In a day or two people would commit to many new projects considered unthinkable a few days before (Schindler-Rainman & Lippitt, 1980).

A second major source is the work of social scientists Eric Trist, an Englishman, and Fred Emery, an Australian. In 1960 Emery and Trist made a major breakthrough in meeting design working with the merger of two aircraft engine companies in England. They sought to apply the research of the late social psychologist Solomon Asch (1952), whose studies pointed to a set of conditions for effective dialogue. People would accept each other’s reality, said Asch, if they could all talk about the same world and experience that all had the same psychological needs, for food, shelter, security, and meaning. They could then begin to treat “my facts” and “your facts” as “our facts”, opening the door to effective planning.

This first “Search Conference” was designed so that people compared notes on the state of the world and the aircraft industry as a whole before getting down to conflicts between the two merged companies. (One made piston engines, the other jets.) One outcome of the meeting was a new engine that today powers the BA146, still in service.

From Lippitt and Schindler-Rainman we learned to get the whole system in the room and focus on the future, not problems and conflicts. From Trist and Emery we learned the importance of getting everybody to talk about the same world and having people manage their own planning (Weisbord, et al, 1992). The name “Future Search” honors both sets of ancestors. We also share with all of them a commitment to democratic ideals and their embodiment in the action research tradition of the famed social psychologist Kurt Lewin (G.W. Lewin, ed. 1948). 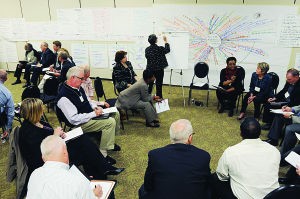 For more information please join us on: